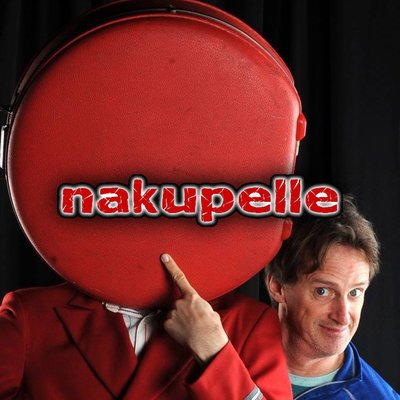 Joe Dieffenbacher (American) and Minna Matilda (Finnish) began as a mask-making company supplying actor training masks to numerous university and conservatory training programs. After working as actors and designers with the Dell'Arte Players in California, they decided to form their own company, Nakupelle in 1992, with the goal of creating original work based on popular theatre forms - circus, slapstick, clown, mime, mask and commedia dell ‘arte.

Nakupelle's goal is to produce theatre that is universal, comic and poetic. To create worlds where even the most serious audience loosens up, laughing like children or staring in wonder.

Nakupelle designs masks and puppets for theatre companies around the world. They have designed everything from full-face character to half-face commedia masks, parade puppets to shadow puppets. They have also designed sets and props for various companies with an emphasis on portability, durability and strong visual impact.

Company member Joe Dieffenbacher is a world-reknowned teacher and director of physical theatre, clown, circus, and commedia dell'arte. He has collaborated with companies to create intimate performances as well as large scale spectacles.

Compagnie Käfig Dance, Physical theatre
Is this profile yours? Claim it!
Cookies help us deliver our services. By using our services, you agree to our use of cookies.