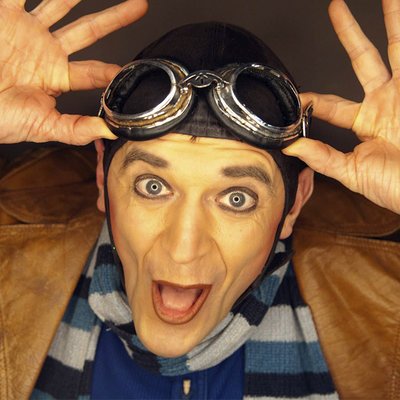 Bart Van Dyck quit his job as a civil engineer in 1992 and went out to explore the world. This decision was the beginning of an artistic adventure that would lead to a brand new career.

With some circus techniques that he acquired after working at the Circus School of Brussels up his sleeve, he became quickly interested in the art of Street Theater. Thirsty for new adventures, curious and full of daring, he improvised his first show in Québec : "TATAA" a clown, a slack rope and a juggler.

After the experience of his American tour, he discovered the art of mime at the Omnibus School in Montreal. Afterwards he returned to Europe and started studying mime-movement-theater with Jacques Lecoq in Paris. In 1994 he started a new show, "MR OO"which was shown succesfully at several festivals in Europe, as well as in Japan, Australia, Singapore, Hong Kong and New Zealand.

Eventually he moved to Canada where he founded Theatre Gili Gili in 1999 together with Martine Dufresne. In 2005 he performed for the very first time in a circus ring during the Festival of Cirque de Demain in Paris with his new character "BARTO". His performance was a great succes and therefore, he was invited to join prestigious circuses and to work for well known variety theaters (Flic Flac (DE), Arlette Gruss (FR), Arena (DK), Knie (CH), Apollo (DE ) Krystallpalast (DE), Le Plus Grand Cabaret (FR), Circus Nikulin (RUS) etc ...).

In 2012 Bart Van Dyck moved back to Belgium and focused more on his solo show. With his newly gained experiences, he continued to refine his sweet and crazy character and enjoys to tickle the hearts of spectators all around the world.

Familie Flöz Physical theatre
Cookies help us deliver our services. By using our services, you agree to our use of cookies.