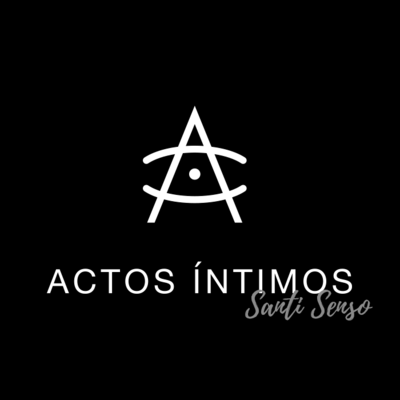 Santi Senso is one of the most revealing creators of culture in Spain and Latin America. "An emotional forceps", thus define Senso's behavior during his so-called “ACTOS INTIMOS” .

Always inviting us to LIVE a unique, brutal, necessary experience to feel alive in that act of generosity with, for and from LOVE.

An essential being in the theater, cinema, painting, photography, dance, literature or other languages that need the vulnerability of their acts to communicate with honesty.

According to his natal chart he comes from wise men, and he is in this world to shape his knowledge. One day someone said, "I want to know where I can read your language, your technique". Santi replied: "It is not written". Another attendee to the gathering said: "They will write for him." And so it has been.

Years later, the editorial Punto de Vista, contacted with Santi and they proposed to publish his Living Dramaturgies and other beautiful crazy things, its language “ACTOS INTIMOS”.

The book launch will be in the FIL 2017 in Guadalajara, Mexico.

Santi Senso lives in Madrid in the multicultural neighborhood of Lavapiés, although he was born in Cáceres, Extremadura, Spain, on September 9, 1979.

He never had teachers, nor did he want them. And perhaps, for this reason, he was creating unconsciously and pushing his inner acts.

Director of International Festival of Intimate Theater in Private Houses. In one of his trips to Venezuela he created the First House Theater in Barquisimeto. Tertullian in the Extremadura Channel Radio Program "The Sun Goes Out West". Professor at the Madrid Film Center "The Vulnerability of the actor in front of the camera". Actor of TV series, Cinema, Theater, Musical and inspiring of other creators and their disciplines as photographers, painters, potters, singers, perfumers, bakers, poets, writers, perfomances, fashion designers, who created works that formed the exhibition" EGOsenso, the confrontation of the other me".

"If you give generosity, one day the generosity will smile, it will greet you. The generous is not only the one who gives, but the one who allows himself to receive" Santi Senso.

Obskené Theatre
Is this profile yours? Claim it!
Cookies help us deliver our services. By using our services, you agree to our use of cookies.