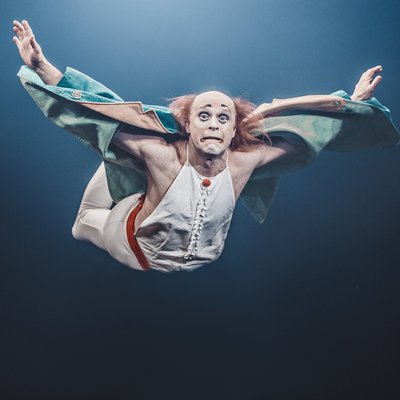 Anatoli Akerman is a clown, physical actor, and a true and passionate artistic soul. He is one of the most intuitive comic performance artists in his field.

Among his career highlights, he was a member of the creation team and performed as a clown in Cirque du Soleil's "KA" in Las Vegas and later in Cirque's "ZED" in Tokyo, Japan. He has toured with the world-renowned Circus Roncalli and was cast as a clown in Walt Disney's feature film "Dumbo", directed by Tim Burton.

At the early age of 6 years old, Anatoli Akerman dared his first steps on stage, imitating his uncle Nathan Silbermann, a Russian comedian-mime artist. Growing up, he studied mime, acting, juggling, tap dance and artistry in circus studios. At the same time, he trained as a sports boxer and participated in Ukrainian championships. Eventually, he was confronted with a choice: become a professional boxer or become a clown. In 1990, he won first prize at the International Mime Festival in Jaffa, and his life-choice was made: Clown.

Early in his career, Anatoli travelled around Europe creating and performing his acts, both solo and also in cooperation with other clowns and physical artists. He performed in many varieties and dinner shows, such as Pomp Duck & Circumstance in Berlin, Germany.

In 2003, he joined Cirque du Soleil, creating and performing in "KA" at the MGM Grand in Las Vegas, with Robert Lepage as director. In 2008, Anatoli began a new, exciting creation with Cirque's show "ZED" in Tokyo, Japan. Under the direction of Francois Girard, Anatoli created new clown acts and his own character for the show.

In 2011, he moved back to Europe and appeared on various stages, such as Friedrichsbau Variety, among others.

Since 2014, he has been touring Germany and Austria with the renowned Circus Roncalli.

Since March 2019, he can be seen worldwide in the cinema as a clown in Tim Burton's feature film “Dumbo”.

Since 2018 he continued touring with Circus Roncalli across Germany and Austria.

2020 Roncalli Tour postponed due the pandemic to an unknown date

Claire Ducreux Dancer, Choreographer, Artistic director
Cookies help us deliver our services. By using our services, you agree to our use of cookies.