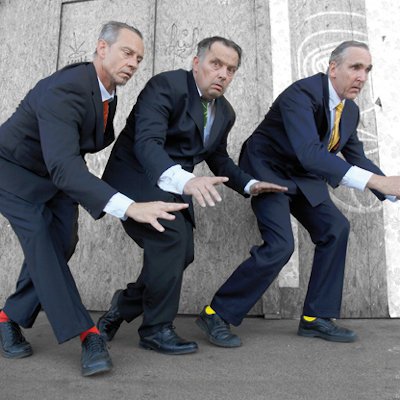 Gordon Wilson and Craig Weston. Both studied theatre at the “L’Ecole Internationale du Theatre Mime Mouvement” of Jacques Lecoq in Paris. In 1991 the two met each otheronce again, this time in Belgium. They worked together in the production ANTIGONE, a contemporary opera, (1991) created and performed by Ensemble Leporello. This collaboration continued in three productions of Leporello, and meanwhile plans unfolded for the begin of a new theatre company in which they could explore their shared vision of theatre and what it can be. In 1995 The Priimitives were born.

The company began out of a desire to work and perform outside of the boundaries of the traditional theatre circuit. The Primitives started out in search of a theater-form which spoke to a wider audience than the theater elite. This search lead the company to create productions that played not only in established theatres, but also in community and youth centres. And this search led them as well to their natural habitat: the street.

Now, more than ten years later, 9 original productions for theater and the street have played in every land of Europe, as well as North America, Israel and Palestine, Australia, Korea, and Japan. In all their plans for the future, The Primitives remain obsessed with the challenge of bringing suspense, humor, emotion and beauty to the widest possible audience the world over.

CIA Perehosta Clown, Street theatre
Cookies help us deliver our services. By using our services, you agree to our use of cookies.